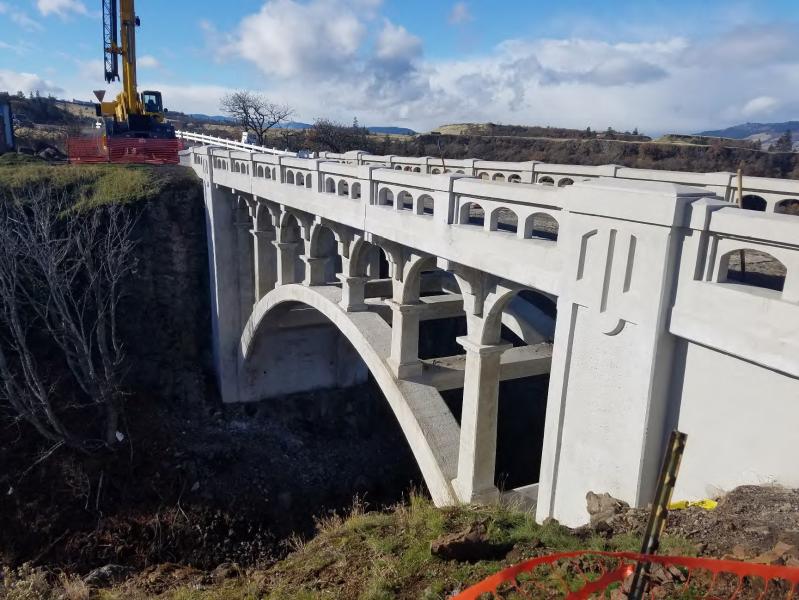 On April 25, 2019 the Oregon Concrete & Aggregate Producers Association (OCAPA) honored Vector Construction, Inc. with an Excellence in Concrete Award for our Preservation/Restoration work on the historic US30: Moisier, Dry Canyon & Chenoweth Creek Bridges.

The project, which included work on 3 concrete bridges in Mosier & The Dalles, Oregon, included rehabilitation work on two nearly-one-hundred-year-old bridges and one new replacement bridge.

The Mosier and Dry Canyon bridges received a concrete repair for a combined total of nearly 100 square yards. Both structures underwent Norcure® Re-alkalization, an electrochemical treatment for carbonated concrete structures. Carbonation is a reduction of pH caused by exposure to carbon dioxide. After the treatment, the structures were coated with cementitious materials for a combined total of 3,050 square yards.

Concrete repairs were also made on the bridge rail for both structures totalling nearly 560 lf. The re-alkalization treatments required the structures to be wrapped in such a manner to keep an alkaline solution in contact with the concrete while electrical current was applied to push treatment into the structure. This wrap-and-treat process was repeated on each bridge in seven-day cycles. Strong winds at the Dry Canyon site made installation of access and containment structures a supreme challenge.

The new bridge opened to traffic at sunrise on August 25, 2017. All three bridges are now part of the new Eastern portal to the gorge HWY 30 Oregon Scenic Byway.